You already know that there are two main options involving human mobility: electric and gas-powered vehicles. Automobile market leader manufacturers, as BMW, Toyota or Volkswagen, who have always been selling gasoline vehicles, are completely changing their business model, and have started launching new electrical automobiles in order to complement their range of models. On the contrary, there are other new players such as Tesla or Polestar which only manufacture electric vehicles.

Electric mobility is a reality, not only in cars but in all other vehicles. This is what happens in our industry, the jetboard industry. You probably have found pure electric or gasoline powered surfboard manufacturers, or even brands that manufacture both of them. The market is full of choices. The reality is that customers rarely know which is the best choice for them.

In order to answer this question, we have made an electric surfboard comparison between gas surfboards and electric motorized surfboards.

Gas powered surfboards need a daily service after every ride in salt or sweet water (such as ocean or lakes) due to the lack of water tightness of the engine, being water cooled. This also happens in jetskis, for instance. As you know, water tightness is the ability to prevent water from penetrating an object. But, why are not gas powered jetboard engines watertight? 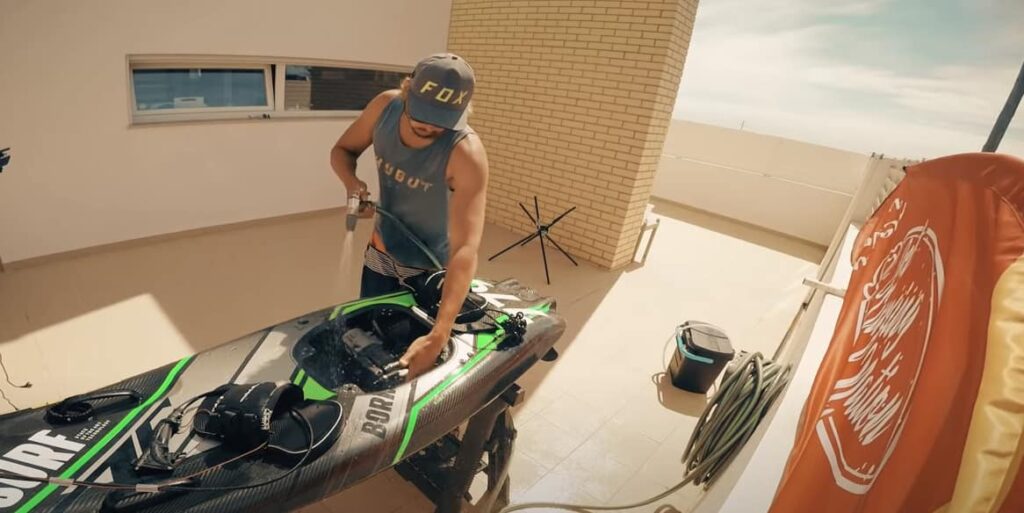 Internal combustion engines run using a mixture of gasoline + oil + air. Note that one of the required elements is “air. In case the motor was completely watertight, water could not enter into the motor compartment, and the engine would not work. Thus, gasoline engines cannot be watertight, in order to take air from outside. For jetboards are designed to use on water, in the same way that air enters into the gasoline engine, so does water. This means it is mandatory following correctly the maintenance guidelines after every use for a correct preservation of the engine. Depending on the brand and engine, some of the maintenance guidelines on petrol surfboards could be:

Note that this are some general maintenance guidelines for internal combustion engines when used in water. You shall check your jetboard manufacturer guidelines before proceeding with the maintenance.

Some Electric engines, on the other hand, are completely watertight, since neither the battery nor the motor need air for functioning like in the case of Onean. This extremely simplifies the maintenance of the jetboard. In overall, the maintenance of electric jetboards consists of lubricating the battery and board connectors with grease after every use, in order to avoid corrosion. Batteries have minimum maintenance for its correct use. In our case, we recommend keeping the charge level around 20% for long storage and charging them to full load before entering the water.

Batteries need to be charged. Fuel tanks need to be loaded. Unfortunately, it is faster filling a 3L tank than charging a 130-ampere battery. Charging time varies depending on the capacity of the battery and power of the charger. Despite this, jetboard batteries usually charge from 0 to 100 in approximately 2,5 hours. This is quite a lot of time compared to filling the fuel tank of petrol jetboards, which can have their fuel tank filled in a matter of minutes. Electric surfboard users usually have additional batteries for their boards. In this way, once a battery is discharged, the only thing they have to do is to plug another one and continue riding.

Petrol engines run with fuel and oil. In case of a failure of any parts of the engine, or while filling the fuel tank near the shore, these elements often leak out and poured into the ocean or lake. It is our responsibility to minimize water pollution by giving a proper use and maintenance to our jetboards. As well as water pollution, gas powered surfboards also release polluting substances into the air through to the internal combustion engine, this is inevitable. 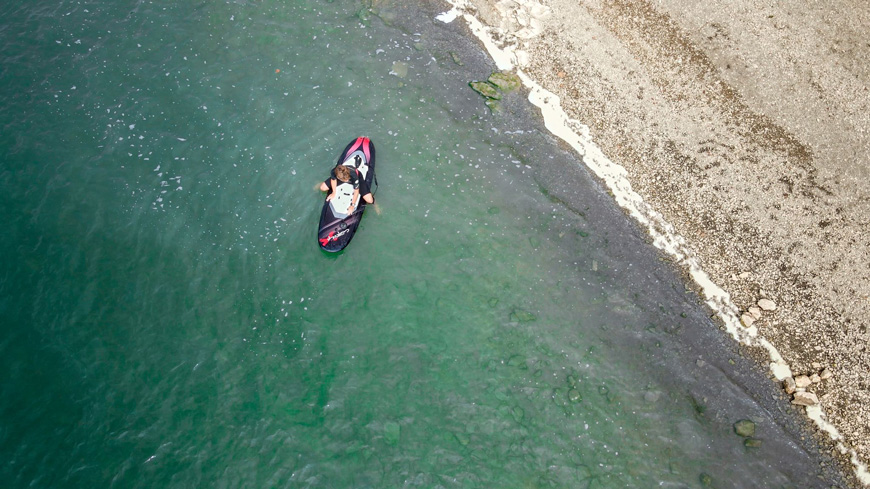 On the contrary, electric surfboards do not release any polluting substances into the ocean, neither liquids nor gases. Clean power and emission free. Besides water and air pollution, noise pollution is something you need to handle with gas powered surfboards. These are quite noisy and can disturb people who are on the water. That´s why many riders look for remote spots to enjoy jetboarding with gas jetboards. Electric jetboards, on the other hand, are much less noisy than petrol ones, as they have no combustion, making them very pleasant to ride.

Following with the automobile industry analogy, it goes without saying that electric cars range is lower than petrol ones. Check the Mercedes EQC, with 410 km range. This is quite normal in such a young industry. However, new developments in electric mobility are allowing to increase this range more and more every day. For instance, Tesla model S has a 647 km battery range, quite close to petrol cars.

Same happens with electric surfboards range. Up today, the average ride time of electric surfboards is between 20 and 40 minutes, and petrol ones, around 1 hour. The more cells a battery contains, the more range it has. However, the range decreases the more power a battery supplies, and batteries become heavier the more cells they have. It is essential to find a midpoint between riding time, weight, and power supply.

For instance, Onean Carver X and Carver Twin, with 10kW and 5 kW respectively, have a 40 minutes riding time when using at mixed speeds. 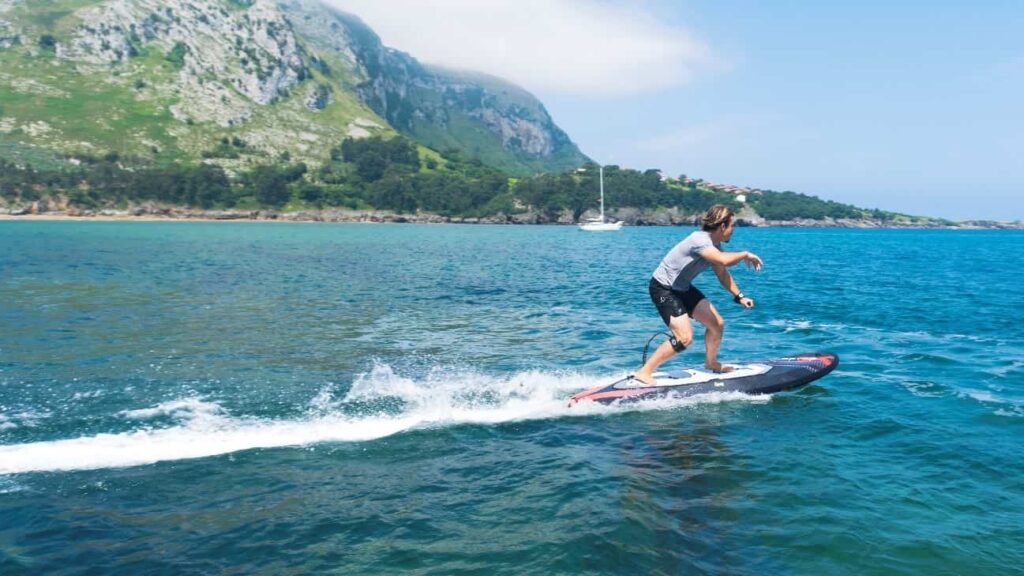 The weight of electric and gas jetboards is almost the same when comparing them between similar size and construction material boards. However, electric jetboards need a battery to power the jet unit. The weight of a standard electric surfboard battery is between 15 and 20 kg, and the total weight of the jetboard plus battery, around 35 kg. Gas powered boards usually weight around 20 kg.

As said before, petrol jetboards make much more noise than electric ones, apart from air and water pollution, they produce leaks and combustion emissions. This is the reason why the use of gas powered jetboards is limited in some areas. Depending on the country, you may find that petrol boards are not allowed in lakes. Many lakes have strict regulations in order to preserve their flora and fauna, or due to being dedicated for human water consumption. Thus, there is no place for pollutant agents in lakes. On the other hand, electric surfboards, powered with clean power, have less restrictions, as they are emission free.

In order to transport the jetboard with batteries by plane, we recommend doing it in a cargo plane, always checking with the manufacturer to make sure they have all necessary documents. There are many companies that specialize in shipping this kind of products. So, if you are planning to move to a different country or going on holidays, there is no need to leave your jetboard behind.

Electric surfboards are more efficient than gas jetboards since the motion is generated directly. Petrol engines generate heat first, which it is turned into movement with small explosions of petrol mixture that move the piston (simplified explanation). Electric engines have less moving parts so the power goes directly to the turbine. This advantage provides to electric surfboards more torque and acceleration than petrol surfboards. The energy of the battery transforms in the movement of the turbine in the same moment you press the trigger of the controller.

It is true that petrol engines achieve higher speeds when driving in a long straight line. But this does not give the feeling of going fast. Torque and acceleration are what makes you say “Hell ya, this is so fast!”. Even more, up to now, the fatest jetboard is not petrol powered, but electric.

4 thoughts on “Electric VS Gas Surfboard. Which one is best?”