As well as jetboards, efoils are one of the latest revolutionary concepts in the watersports industry. Visually attractive and providing lots of fun, many people have found a new way to enjoy boardsports when there is neither waves nor wind. But what is an efoil and how does it work?

An efoil is an electric powered board equipped with a mast and wing. The board lifts up from the water after achieving certain speed, making the effect of “levitating”. Unlike traditional foil boards, efoils do not need the power of waves to raise above the water since being powered by a battery and propeller. This makes them ideal for flat waters like lakes and calm seas.

As you may have noticed, efoils are the electrified version of traditional hydrofoils. Both share almost the same components, excluding the battery, propeller, and controller from the efoil. For many people, foiling is still the great unknown within the watersports industry. Everybody knows what jetskiing, surfing and windsurfing are. But, seen someone flying above the water is a different story. Let´s have a closer look at the main components of efoils in order to learn a bit more about their functioning.

Surf, windsurf, jetboard and efoil boards are not only measured in length, width, and thickness, but also in liters. The more liters a board has the more stable and buoyant is. As you may have noticed, Stand Up Paddle boards are much larger than standard surfboards in order to ease standing up. Same thing happens with efoils. Even though efoils are not made for gliding over the water, the truth is that is much easier to achieve levitation on a more stable and buoyant platform than in a smaller one. Heavy riders will find necessary to have a larger efoil board in order to stand.

So, why would anyone buy a small board? Well, small boards are perfect for doing sharp turns and technical manoeuvrers. These are the preferred option for experienced riders since are more “challenging”.

When thinking about masts, it always comes to our mind an upright pole used in boats for tighten the sails. Foils and efoils masts, on the other hand, go upside down, submerged in the water. The purpose of the mast is to hold the fuselage, wing and stabilizer, in order to achieve levitation. 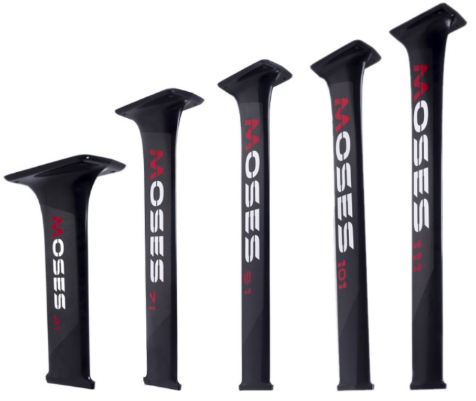 There are different sizes of masts. Short masts are ideal for beginners as they do not allow rising too much from the water, apart from being more rigid than larger ones. In case of losing control and height, the impact of the board with water will be softer with a small mast rather than with a larger one.

On the other hand, when doing sharp turns using short masts, the wing and stabilizer comes out from water easier. This is called breaching. When this happens, the board loses balance and power, and the rider falls from the board. In order to avoid this, larger masts need to be used.

Large masts are also recommended to ride with swell. When using large masts, the rider can adapt the height of the board to the waves and avoid impacting with them.

The fuselage is the bar attached perpendicularly to the mast. Where the wing and stabilizer are fixed. In large fuselages, the front wing is closer to the prow of the board. This makes the board more stable, and allows reaching planing faster at low speeds. However, the risk of breaching is higher since the wing is bigger. For greater speeds and turns shorter fuselage need to be used.

Traditional foils and efoils always have two wings attached on the fuselage. The front wing is responsible of lifting the board, while the rear wing (also called stabilizer) applies force downwards in order to keep the trajectory longitudinally stable. The bigger the wings the more stable and slower is the board, easier to lift and harder to turn. 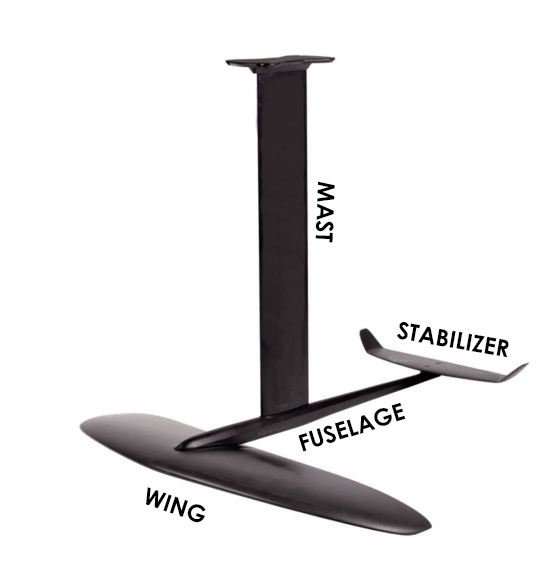 The same as jetboards, efoils need a propulsion system in order to push the board forward. In case of the efoils, this is located on the bottom of the mast, and usually consists of a propeller rather than a jet. The propeller is powered by a battery placed on the board, which is often activated using a wireless controller. Due to the risk of injury with the sharp edges of the propeller, many boards use a safety ring on it. 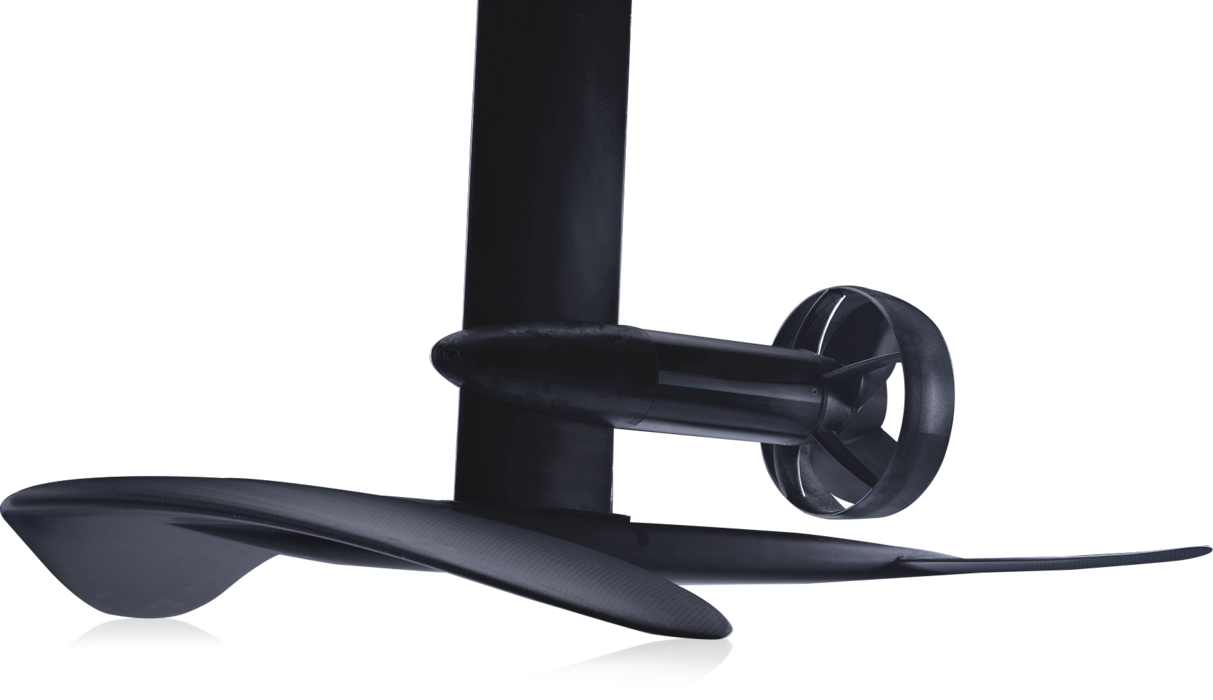 Now that we all know the basic functionality of efoils, let´s have a look to the frequently asked characteristics of any electric powered vehicle, such us the ride time, weight and max speed.

Efoils have much less drag than jetboards since the board is not in contact with water while levitating. When jetboards reach planing, the board is still in constant contact with water. This means that water is adding resistance to the movement of the jetboard. On the contrary, the board on efoils does not touch the water when it is levitating. The propulsion system, wing, fuselage, and mast are the only components that the water puts resistance to. This significantly decreases the battery consumption and consequently increases the riding time. Efoils usually have up to 1 hour of riding time. 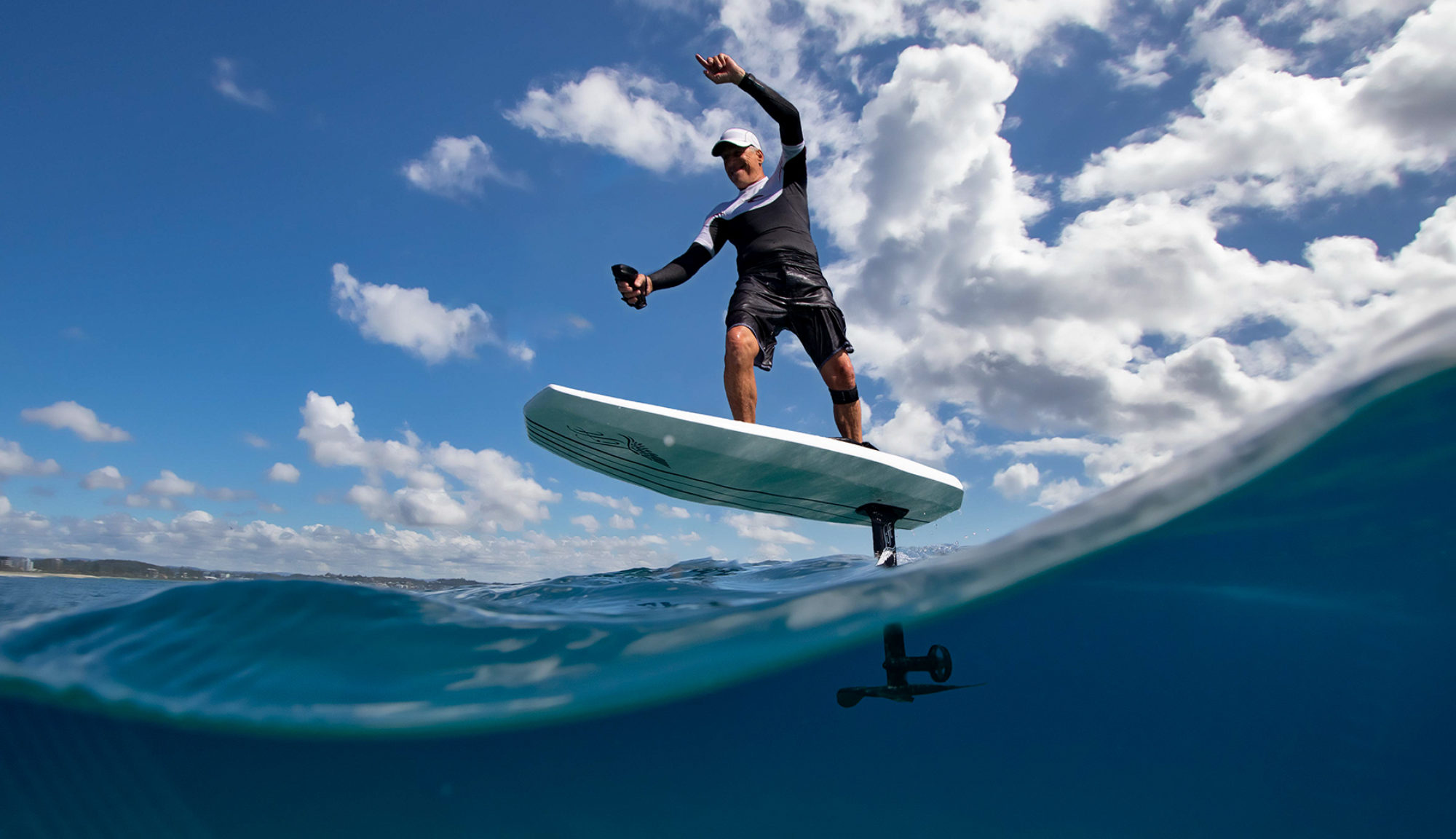 Electrified versions of traditional products will always be heavier due to the weight of the battery and motor, and this is something that also happens with efoils. Apart from the board, mast, wings and fuselage, efoils are equipped with a propulsion system and battery cells. The standard weight of an efoil battery is around 14 kg and 20 kg for the board, which sets to 34kg the total weight of the efoil.

The maximum weight of the rider that an efoil could stand depends on two factors: The volume of the board and the power of the motor and battery. Heavy riders will always find easier to achieve levitation with bigger and more bouyant boards. Big boards allow to lay down on them without sinking. Once you are well positioned on the board, you only have to worry about standing up on the board and control the position of you weight in order to start levitating. When using smaller boards. heavy riders will find quite harder to use them as they will sink the board as fast as they lay down on them.

It makes sense that the maximum weight of the rider on efoils will be higher when using more powerful motors and battery combination. There are also other significant elements, as propeller, wings and fuselage which, when being well developed, will increase the maximum load of the board and allow heavier riders enjoy efoiling. 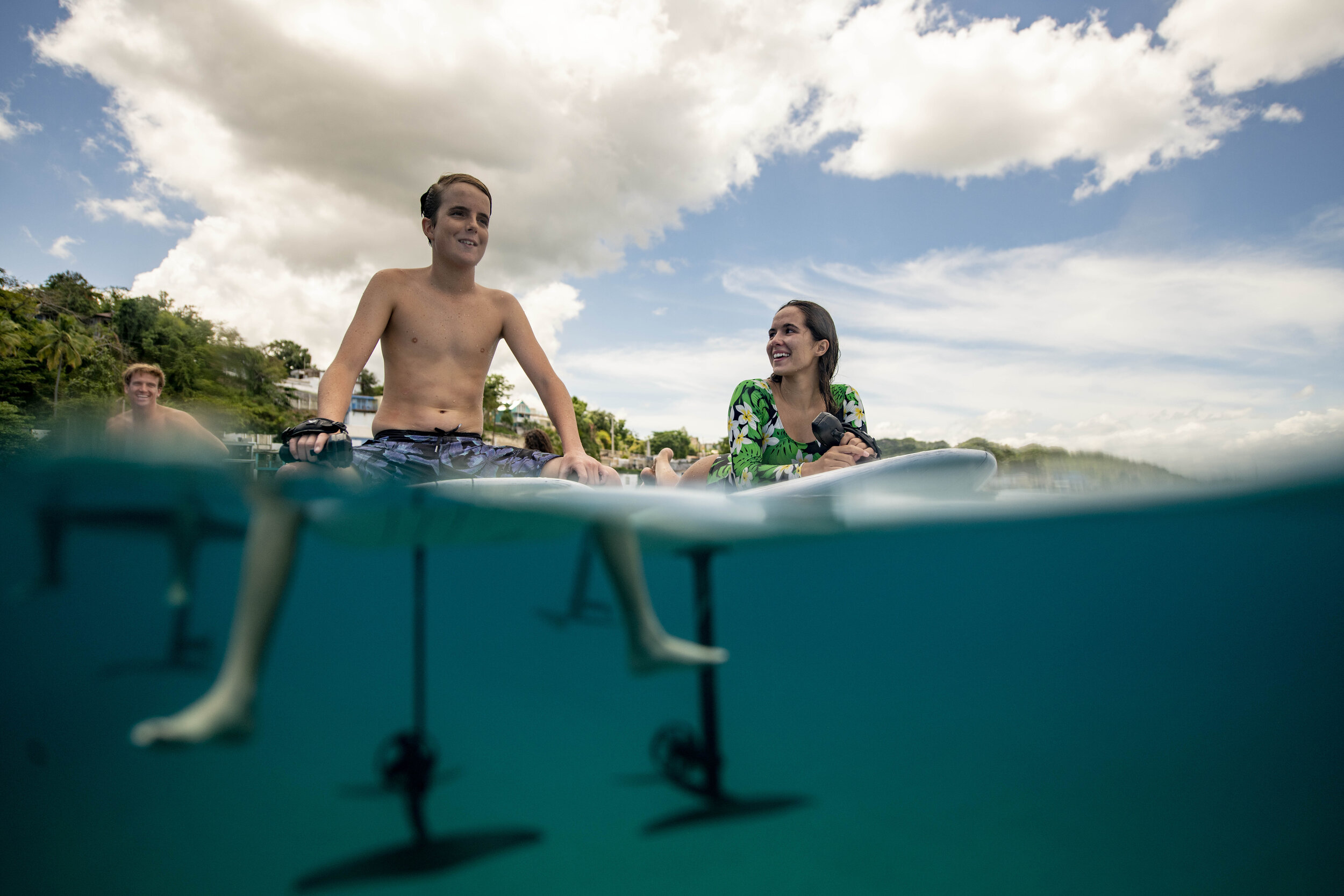 When using efoils, in order to set the maximum speed, it´s important taking into account another variable (apart from the weight of the rider), the wing. As you know, bigger wings lower the maximum speed when foiling. Anyway, the maximum speed of a 75 kg rider using a fast wing when riding an efoil is usually around 43-45 km/h.

Hope you enjoyed this introduction to the main features and functioning of efoils. In case you want to learn more about jetboards and the differences between gas and electric jetboards, we recommend having a look to this post: Electric VS Gas Surfboard. Which one is best?